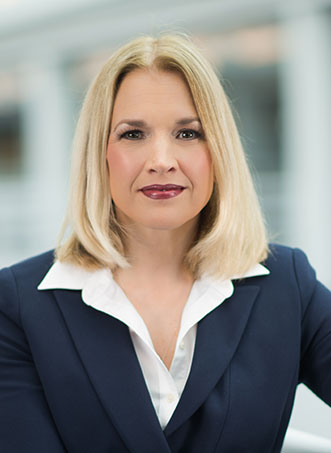 Christine Hickey has practiced law for over twenty years, seventeen of which are at Lewis Johs.  She became partner at the firm in 2012.

Christine’s primary focus during her tenure at Lewis Johs has been the defense of physicians, podiatrists, dentists, hospitals and nursing homes in malpractice cases.  She has also defended claims of products liability and complex general liability.  Due to her extensive background in medical malpractice cases, she has been called upon to assist in non-malpractice matters involving unique medical issues.

Christine is the primary counsel for a large orthopedic group, representing the members of the group in a wide array of orthopedic malpractice cases.  She has also counselled various clients in advance of anticipated malpractice litigation, and has lectured clients on risk management and avoidance.

In addition to litigation, Christine has represented clients before governmental disciplinary agencies.  She has also presented cases to the dental claims committees of various counties and has successfully mediated a number of malpractice cases.

Christine is admitted to practice law in New York and the United States District Courts for the Eastern and Southern Districts of New York.  She received her Juris Doctor degree from Hofstra University School of Law in 1993, graduating with distinction.  She was a member of the Hofstra Law Review and worked as a torts research assistant.  She also authored two publications while in law school.  In 1990, Christine earned a Bachelor of Arts Degree in English, cum laude, from Hofstra.  While at Hofstra, she was a member of Phi Beta Kappa and the English Honor Society.  Christine is a member of the Bar Associations of Nassau and Suffolk.