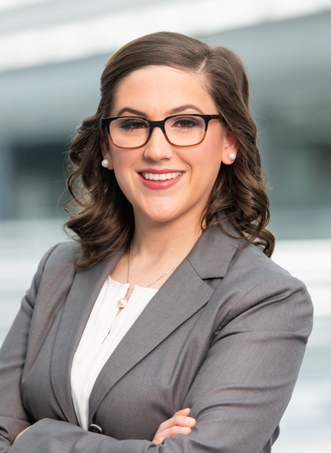 Caroline Hock is an associate with the firm concentrating her practice in a variety of general liability and casualty defense matters, including vehicular negligence, property damage claims, municipal liability, and insurance coverage.  Caroline began her career at Lewis Johs upon her graduation from law school.  She played an integral role in the successful resolution of storm damage disputes through mediation in the aftermath of Superstorm Sandy.  Caroline is proficient in electronic discovery, including the collection, processing, review, analysis, and production of electronically-stored information.

Caroline received her Juris Doctorate from Touro College, Jacob D.  Fuchsberg Law Center.  While in law school, she served as both the Director of Student Colloquium and as a senior staff member of the Touro Law Review.  She clerked for the Honorable Joanna Seybert in the United States District Court for the Eastern District of New York, where she performed legal research and drafted legal memoranda for use in the Court’s opinions.  Caroline also worked for the Mortgage Foreclosure and Bankruptcy Clinic at Touro, where she assisted local residents facing mortgage foreclosure or the need for personal bankruptcy.  She additionally worked as a legal intern at Lewis Johs.

Caroline is admitted to practice in New York State, as well as in the United States District Courts for the Eastern and Southern Districts of New York.